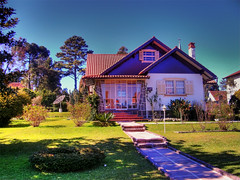 Many people, especially young married couples, start thinking that they need to buy a house, and as soon as possible. Home ownership can be pretty cool… that is, if you can afford it.

Even if you have a pretty nice salary, individual or both spouses, you might find that owning a home costs way more than you expected it would. If you’re good at budgeting you might figure it out. If not… well, it could be harrowing.

Here are some things you need to know:

1. Many rental agents you go to figure out how much home you can afford. Many of them are going to tell you that you can afford a home at least 3 times your income. If that sounds scary it is.

They’re not really being sneaky, but the reality is that the more you spend on a home, the higher their commission is. They follow a formula, and that’s that. You have to think more about what you’ll feel comfortable in paying for than what someone tells you that you can afford.

2. What should you consider instead? Even though every community has different standards for home prices, for the majority of buyers a safe place to start is taking your entire income and adding 50% to it. So, if your income is $100,000 a year, start off looking for a house that doesn’t cost much more than $150,000, but be thinking about paying much less.

If you’re a first time homeowner, mortgage isn’t the only thing you have to deal with. Unless you can put down 75% of the cost of the home (and how often does that happen?), you have to have property taxes (escrow) attached to your monthly payment. So, even if you get one of those 3% interest rates, you’re most probably going to have to think about adding anywhere from $400 to $700 a month to your payment, depending on where you live. The benefit is that you won’t have to worry about putting enough money away to pay property taxes.

The other reason is that we’ve had a couple of down periods where the real estate market is concerned. People who bought expensive homes found they couldn’t keep up with the payments and many ended up losing their homes. Buying a more affordable home means you have a better chance of keeping up with payments when times get tough.

4. That’s just for starting purposes. Unless you moved into a totally furnished home where you love everything and don’t change things around (really?), you’re probably going to spend at least $10-20,000 to get it the way you like it. Most people save up just enough money to get the house without thinking about the other stuff, which of course means most people put a lot of stuff on credit cards. Suddenly, you not only have mortgage but higher credit card bills.

5. If you’ve been living in an apartment, be prepared for sticker shock when it comes to utility bills. You might get lucky and move to a community that supplies its own electricity, but for everyone else, expect the bills to at least double. If you never paid separate utilities before expect bills anywhere from $150 to $500 a month depending on where you live and seasonal changes. Also, electricity cost more than natural gas to heat your home so if it gets really cold… you know…

6. Lawn care doesn’t have to be expensive if you know how to cut your grass but if it’s your first home you’re going to need to buy a mower and some other things. At least this should be a one time purchase. While you’re at it, you might as well think about things like, depending on where you live, snow shovels, leaf blowers, trimmers, etc.

Also, you might move into a community that has certain lawn standards. Some communities have monthly fees you have to pay for the right to live there. That’s not covered in the mortgage, so it’s another expense you’ll have to figure out how to deal with.

8. Final thing. You don’t have a choice; you MUST buy homeowners insurance as a first time homebuyer. If you buy it from the same people you get your car insurance from, the rates might not be that high and it could even end up with you getting a discount on your car insurance. Still, it’s another addition you have to think about, and the amount you’ll owe depends on how much you pay for your house and, of course, it’s location.

Home ownership isn’t all that bad once you get used to making the payments, especially if you’ve set out to make sure what you purchase is affordable. But many people find the grind hard to keep up with; don’t put yourself through that without considering the realities above.