I’ve belonged to a wholesale warehouse club store for a very long time. Over that time, I’ve saved a lot of money, so I really can’t complain about much. 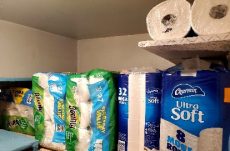 With that said, I have to own up to having an epiphany that’s been long coming; you don’t always save money at these stores. Not only that, but sometimes you’re going to spend more in these stores than you will at traditional stores. You also might have other issues to deal with that you hadn’t considered. Let’s take a look at some of these things.

1. You don’t always save money on paper products.

Years ago, the biggest benefit in going to warehouse stores was when it came to things like paper towel and toilet paper. I remember when you could get 36 rolls of toilet paper for under $10, whereas a 4-pack at the grocery store was $2.50. You also used to get 16 rolls of paper towel for under $10 when in the store it was $1.25 for an individual roll. That margin has lowered drastically, and some days you’ll even lose money buying at a warehouse store.

Now let’s look at paper towels. I priced paper towel at the warehouse store, and it was $25.99 for 12 rolls. I priced it at the grocery store and was $6.49 for 4 rolls. That comes to $19.47 for 12 rolls as opposed to $25.99; do you see something wrong there? The caveat was the rolls from the warehouse store were a little larger than those at the grocery store but not large enough to alter the price all that much.

Also, when you’re shopping at a warehouse store, your belief is that the larger the product you’re getting, the better the price is; that’s not true either. It’s not the actual price of the item you should be looking at; it’s the price per whatever the volume happens to be that’s important. Two weeks ago I went to the store and saw that the price for the bigger package was higher than the smaller package, which was expected. However, the price per volume was higher than the price for the smaller item; what gives?

It’s all about marketing and perception. If the store recognizes that more people are buying the largest item, believing they’re saving money, they’ll often increase the price of that item, sometimes slowly, sometimes in one big jump. If it keeps selling, they’ll keep the price high because it generates more money for them. It’s sneaky, but legal. It’s up to the shopper to actually “shop”, then decide what’s best for them. I bought 2 of the smaller packages, paid $12 less than if I’d bought two of the larger packages, and ended up with more paper towels than I would have with the large package; how about that?

2. Storage can be a major issue.

Part of the idea of buying stock items at a warehouse store is that the savings come because you’re buying in bulk. That sounds well and good unless you don’t have the space to put all of that stuff.

During the pandemic, many people were “fear” purchasing, worried about things running out… which of course happened. However, many people found they didn’t have a lot of space for all those things, so often they put some of it in bedrooms, garages, even sheds. I don’t know a lot of people who could store 2 1-gallon jugs of distilled white vinegar, 2 13 1/2 pound bags of baking soda, 3 pairs of 1 lb 12 oz boxes of cereal and still have a lot of space left for much else to go on the lazy susan. The price by volume might seem good at first, but if you’re going to run out of space it might not be worth the savings.

3. How much can you really eat of one thing?

In general, most of the time you’re not going to save any money when it comes to produce, aka meats and vegetables. The only way you’re going to save money is by buying in bulk… and I mean enormous amounts of bulk.

Some years ago a client of mine wanted to make a large meatloaf, larger than normal, to freeze as smaller meals. For some reason he bought 13 pounds of hamburger… you read that right! He ended up making a 6-pound meatloaf and had 7 pounds of it left over.

That 6 pounds of meatloaf ended up making 25 servings in its own right… without the extras like mashed potatoes and mixed vegetables, which he eventually included. He took 4 pounds of what was left and separated it into 12 oz packages he could use at a later time for things like spaghetti sauce, and made 6 oz hamburger patties out of what was left.

As you can imagine, that was a bit too much hamburger. It was a major mess trying to fit all of that stuff into the freezer, considering there are already other things in there, and he ended up having to move some of the food elsewhere and throw a few things away. Luckily he have a second refrigerator in the garage, but even with that there wasn’t enough room for everything.

Many people bulked up on their favorite foods when they came back to the stores, believing that shortages were going to come back and they wanted to be prepared. That turned out to be true… a year later. Meanwhile, some purchased food items expired while in storage; turns out that just because you don’t open something doesn’t mean it might not spoil. Just something to think about.

This one should be easy, yet I know a lot of people who still go to a warehouse store first when they’re ready to buy almost anything. I know a few people like this, and I understand.

There’s no denying that often (although obviously not always), you’re going to get a good deal on many items from a warehouse store. However, there are times, such as around holidays and other sales (many store chains have specials all the time), where you might be able to get the same item for a lot less money. If you’re looking for an item that’s not something you need often, it doesn’t hurt to look in the newspaper (if you still get that) or check out prices online for stores whose names you know to see what their prices might be that day.

Some years ago I wanted to buy a 128GB MicroSD for my smartphone, when the prices were high. Although I was ready to head to the warehouse store, I decided to visit a technology store (I’m not mentioning names) first to see what their price was. It turned out that they had a great sale, and for that week I could get a high quality 128GB card for $80 that normally went for $225; wow! That same card at the warehouse store was $189. At any other time it’s possible that it would have cost me less at the warehouse store but in this case the savings were astronomical. I do that all the time now, once I learned that lesson.

These are just a few examples showing that your best deal might not always come from a warehouse store. They’re still fun to go through to see what they have, and often you’re probably going to save money or find items your regular stores won’t carry. Still, it pays to be a smart shopper. Research, don’t always immediately buy something without checking to see if you can get a better price elsewhere, and make smart decisions; is it worth driving 10 miles to save 10 cents on a roll of tape? 🙂